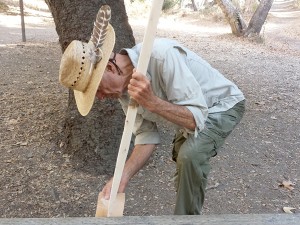 Jim is an Aboriginal Skills and Wilderness Survival Training Instructor and volunteer Naturalist for the Santa Monica Mountains.  He was born in 1939 at the base of the foothills of Oakland California where he roamed the wild as a young child, hunting, fishing, building shelters, etc. At age eleven Jim’s family moved to La Jolla, California where he spent almost every day skin diving for fish, abalone, lobster, etc., surfing, exploring wild areas and playing many sports. At age fifteen Jim’s family moved to Santa Monica, California where all of the outdoor activities continued and Jim signed a contract to play professional baseball upon graduation from Santa Monica High School. After a career ending arm injury, Jim wore many hats. He attended Santa Monica College, then served in the military. Upon completion of that obligation he went ski bumming at Tahoe, Ca., then worked in the stock market, later became one of the fastest bartenders in Los Angeles for several years, was a top producer in the insurance business for several years, became a yoga instructor, martial artist, licensed, certified therapeutic body worker (for over thirty years), certified nutritional councilor and hypnotherapist. Around 1999 Jim learned about the existence of Aboriginal Skills Schools, wilderness survival schools and primitive gatherings which felt like coming home to Jim. He attended schools all over the western U.S., Canada and Mexico.

After several years of practice and training he became an instructor. Jim is also affiliated with state an national parks as a volunteer naturalist and trainer in the Santa Monica Mountains where he spends a good deal of time taking deprived school children into the wild, facilitating their connection with the natural environment in a fun educational and very personal way. Jim found that the practice of aboriginal/indigenous/primitive skills and the deep rooted connection and relationship it fosters with our mother earth, is just what we need for a healthy happy life. It is deeply satisfying for him to share these ancient skills … this way of being, with all who are interested. He says the learning never stops for any of us … we simply continue our journey into a deeper, more joyful, harmonious way of being. Jim also found that living a good life is mostly about deepening our relationship and communication with everyone and everything. He says as an Aboriginal Skills instructor we practice many skills and he sees them all as pathways to the greatest skill of all, which is how we are with one another and all of life. In other words to give and receive love continuously and unconditionally! When we fail, we pick ourselves up, dust ourselves off, apologize and continue with our purposeful intention of living the good life … no need to wait, the time is now!

about classes and events